The introduction of Software-Defined Storage (SDS) is changing network architectures in data centers. The cabling density is increasing. What does that mean for the design?

Suppliers of IT infrastructures have established the principle of Software Defined Storage (SDS) on the market. And they have created the technical prerequisites to be able to integrate storage tasks in the server infrastructure.

Increasing virtualization means data traffic between servers is growing. At the same time, there is an increase in CPU and PCI performance. These advances should also get through to users. They expect acceptable latency.

Good to know
Shifting storage into the server housing means networks are consolidated (see figure). Cabling density increases as a result, both at the server housing and at the switch or router. This needs to be considered during infrastructure planning.

Statement
The evolution of data center networks described can only be successfully implemented with more bandwidth and greater cabling performance. As a result, data centers have to ensure their networks can cope with using 40/100 Gigabit Ethernet (GbE). 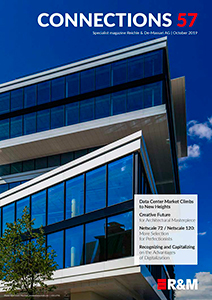